The restored edition of John Carpenter's The Fog opens Friday 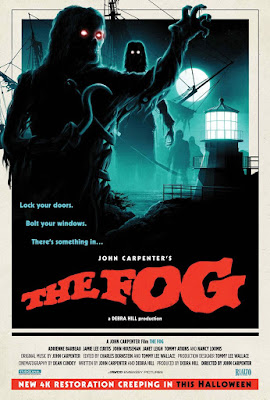 I was a fan of The Fog. Halloween scared the shit out of me for exactly one hour and then it simply stopped. I don’t know what happened but about an hour in I was no longer scared and I stopped really caring. It was good for what it was, but nothing more. The Fog on the other hand had plot and characters and shadowy monsters that couldn’t be stopped and it was just a great story that I wanted to see over and over.

The plot of The Fog has a group of long dead lepers returning to Antonio Bay California in order to get revenge on the descendants of the town that had killed them on the anniversary of the tragedy. As the town prepares for a grand celebration, a fog like the night the ship was wrecked rolls in and the killings start.

It’s an old school ghost story of the sort we used to get before the movies was taken over by gory effects and mindless killing. No it isn’t perfect, it’s always been a tad clunky but it is a lot of fun. It is perfect for watching with a drink and a big bowl of popcorn. (And its way better than the misguided remake)

And now like the ghosts of old The Fog is hitting theaters again in a gorgeous 4K restoration this Friday. If you’ve never seen it now is your chance and if you have, here is a chance to see a gorgeous print. Best of all it is playing in more than a handful of theaters but dozens and dozens of them. You have to go because this film is an absolute blast. Its John Carpenter at the height of his power and stature in Hollywood.
Posted by Steve Kopian at October 24, 2018