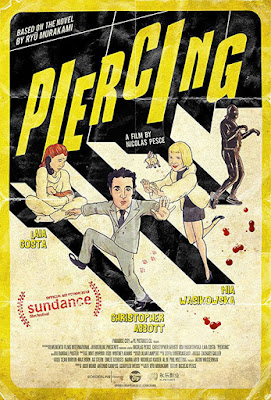 This should be the last shade of grey you will ever need to see in the movies. To get rid of his murderous impulses, a new father plans to do a quickie murder out of town, but God and his intended victim laugh at his meticulous planning in Nicolas Pesce’s Piercing, which screens as a selection of this year’s Ithaca Fantastik.

Reed has been successfully fighting the urge to stab his newborn infant with an icepick, so good for him for being so responsible. Logically, he decides to get it all out of his system by murdering a S&M prostitute in an upscale but still seedy what-happens-here-stays-here hotel. His wife and baby seem to approve of this scheme, at least according to his highly suspect perception. As he awaits her arrival, Reed his envisioned crime in obsessive detail. However, the plan starts to when the unhinged Jackie is sent as a sub for the sub.

Technically, Jackie is still a submissive, but her thing seems to be deliberately riling up clients, so they will hurt her. She could very well be more than Reed can handle. She might also be unto him. If so, it is because it takes one to know one.

Piercing has some merit, but even though it is based on a Ryû Murakami novel, the whole premise of the loving father who is really a twisted psychopath feels really old hat by now. The assorted reversals are well played by Mia Wasikowska, but they are as predictable as the rhythm of metronome. Christopher Abbot also has such a weak presence as Reed, it is hard to believe he could overcome an infant with an icepick, let alone a full grown, potentially psychotic woman.

The scale model exterior shots and giallo homage flourishes are cool, but the film never surprises us. Instead, it leaves wondering was it really worth going through so much, just to reach this point? Still, it completely alters what mostly of us think of Wasikowska. Her performance is so electrically fierce, it nearly redeems the entire picture.

Pesce is also quite the stylist, but the voyeuristic experience he tries instills makes you feel slightly dirty for watching. Not recommended despite Pesce’ command of mood and style, Piercing screens Saturday night (11/3), as part of this year’s Ithaca Fantastic.
Posted by Steve Kopian at October 31, 2018