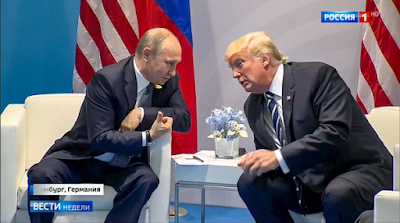 Hitting VOD Tuesday is the mind boggling and frightening OUR NEW PRESIDENT which charts the Russian government propaganda campaign against the US and for Donald Trump. Using news footage from Russian news sources the film shows how the Russian news services simply spewed out story after stories in an effort to wound the US political process because the stories got picked up by right-wing websites as wholly truthful.

It begins with a look at how Hillary Clinton was cursed because she looked upon a mummified princess in Russia and then charts the history of the Russian news services from before Putin combined them into one service, through their being made a tool of the government for propaganda (whats good for Russia is to be reported and will keep you alive the reporters are told outright), the creation of a global Russian slanted news channel and their attacks on everyone who wasn't Trump. Its both funny, because the "news" stories are just so damn loopy, and frightening because people, even in the US, actually believe the bullshit.

I was laughing for about ten minutes of the film and then I just stopped because it stopped being funny. Big Brother is writing the news and it's all coming from Russia.

The film is a clear indication of just how much the Russians are influencing our politics simply by broadcasting these wacky stories. Its plain to see and while I would love to show the far right the film so they could see where all their information is coming from I doubt they would believe any of it because they are so knee jerk reactive it wouldn't matter since the Russian way of seeing the world is now their way.

A terrifying must see film- OUR NEW PRESIDENT will scare the pants off you.
Posted by Steve Kopian at October 27, 2018