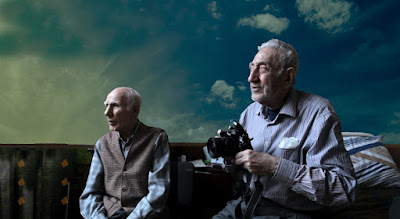 Distant Constellation is one of the wonderful surprises of the film year. A frequently beautiful look at the people living in a retirement home in Istanbul Turkey it presents us with our past and our future in a way that moves us.

Director Shevaun Mizrahi filmed the people in a home over several years, pausing to also film the buildings going up around it- essentially as we witness the past through the eyes of the residents we see the march of progress outside. From the description it would seem that on the face of it there isn’t a lot to the film- but within the stories of the people we meet we travel across the globe as trips are recounted, love lives are relived and history witnessed.

While much has been made of the fact that the residents recount tales of the Armenian genocide I found I was more intrigued by the smaller moments, the simply recounting of their lives and families. Yes the tragedy was affecting but hearing of their lives, say of eye problems, almost off-handedly made me connect to them as people. Early on as one resident with bronchitis talked of going to see the well-known “doctor, Mr Mario” while rolling his eyes brought me into the film because the film transcended being people on the screen to be like sitting having coffee with an older relative.

Somewhere along the way this film wormed its way into my heart and I began to hang on every word. The film stopped being about something and instead became the best sort of film, one where we hang out with friends. And I do mean friends because over the course of the film’s 80 or so minutes the people on screen become like friends.

Distant Constellation begins its theatrical run Friday at New York’s Metrograph before playing at other theaters.
Posted by Steve Kopian at October 30, 2018