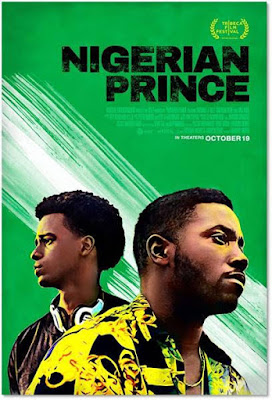 NIGERIAN PRINCE premiered at  Tribeca earlier this year. With the film opening Friday here is the piece I filed when I saw it back in April.

Faraday Okoro's first film as director is a nice calling card for the future. While I personally wasn't in love with the film, son't get wrong I do like it, others at the screening I attended raved about it.

Written up badly in the promotional material as the story of an American teen sent to Nigeria to visit relative to learn about his culture who gets hooked up with his cousin who is a scammer. This is really about the cousin who gets in over his head with the corrupt chief of police who wants a huge pay-off not to kill him. The American kid story is the least part of the film, existing only to act as a kind of deus ex machina late in the game. Frankly the kid is a spoiled brat and the sort of person even a pacifist would strangle with no second thought.

When the film focuses on the man in danger this is a gangbuster film that is not going to win any awards for tourism to Nigeria. There is a real sense of place and of danger that puts the film over. It also boasts a great cast at the top of its game.

Most assuredly recommended
Posted by Steve Kopian at October 16, 2018