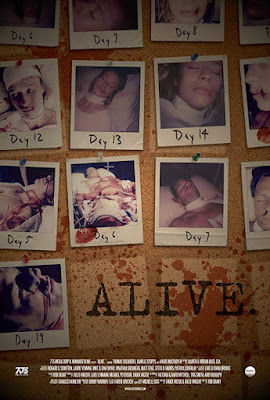 A badly injured man and woman wake up with no memory of who they are. they are watched over by a strange caretaker/doctor who seems to both be trying to genuinely heal them and torment them. Will they be able to figure out who they are and escape?

Good but not great horror film is, for a chunk of it's running time a grand puzzle of a film. What exactly is going on? Neither of the protagonists know, even if they get some sort of flash of a past. We are along for the ride and we will have to wait to find out what is going on until they do.

The film is a bloody mess with the pair wrapped in bandages and frequently oozing from their wounds. There are body parts and rooms filled with blood. its the sort of thing that will make those without a strong stomach ill. What makes it all work is that other than some late in the game grotesqueries the film keeps the gore very real making it hard to pretend it's fake.

There is a great deal to love about the film including a very strong sense of suspense and unease.

There is however a serious problem with the film and that is the fact that the film is really wildly over long for what it is. Yes I know it's all well done, but after say about 20 minutes the film kind of stalls and gets into a repetition of events as the mad care taker tries to "help" the pair and they try to break free. There is a sameness to it all until we get to the denouncement... and I was left to ponder if the payoff was worth the 80 minutes that proceeded it. Yea the ride was good but it doesn't need to take as long as it does to get there. (This would have been great short)

Don't get me wrong ALIVE is not a bad film, more it's this could have been done in roughly half the time.

Good not great it's still worth a look.

ALIVE plays Friday at The Blood in the Snow Film Festival in Toronto. It will also play the following week at the New York City Horror Film Festival
Posted by Steve Kopian at November 22, 2018