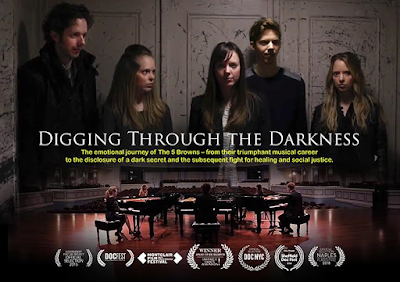 Portrait of the five Green children who became famous as performing act during which they all played piano. They were the subject of stories on 60 minutes as well as other shows. Then one day the girls revealed to each other that their father had been abusing them. The siblings then banded together to send their dad to jail.

Uneven and ultimately just okay documentary doesn’t quite work. While there is a compelling story here director Ben Niles never quite gets the tone right. Is this a film about the music or about the abuse? I’m not sure. While the music is always there, the story of the abuse, felt to me, kept at a distance as something that happened while other things were happening. This isn't to take away from what happened only how it is presented left me unsure about how to react because I never emotionally connected.

DIGGING THROUGH  THE DARKNESS plays later today at DOC NYC
Posted by Steve Kopian at November 11, 2018