Brace yourselves for an X-rated Xmas! The Quad reveals the initial lineup for our 50th anniversary survey of the MPAA's infamous "X" classification

Featuring over 25 cinematic excursions into forbidden sex (real, simulated, and animated) and uncensored violence. Highlights include: In the Realm of the Senses, A Clockwork Orange, Sebastiane, Snuff, The Evil Dead, Klute, Maîtresse, Salon Kitty, I Am Curious (Yellow), and more! 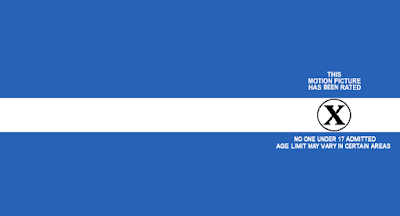 Fifty years ago the Generation Gap was widening, the Vietnam War was beaming onto television screens nightly, and filmmakers were pushing the envelope worldwide. What was the Motion Picture Association of America, the trade grouping of Hollywood’s major studios, to do so as to better inform anxious parents about which films were suitable for what ages? U.S. President Lyndon Johnson appointed longtime associate Jack Valenti to head the MPAA, and on November 1, 1968 the latter conceived a new industry Code of Self-Regulation and an alphabet-based “voluntary ratings system” to indicate the presence of sexual and/or violent content. The X rating drew a line in the sand: no one under 18 (or, per a 1970 redraft, 17) was to be admitted to a theater showing an X-rated movie. Some felt this didn't go far enough towards eliminating content considered "obscene," while others felt it would lead to draconian censorship.

Since the X rating wasn't trademarked, the burgeoning pornographic-film industry quickly appropriated it to apply to their own product as a disreputable seal of approval and a point-of-pride marketing tool (“triple-X-rated!!!”). After initial cachet and notoriety, Hollywood shied away from X-rated movies, as many mainstream theater owners were squeamish and newspapers wouldn’t accept ads; films initially tagged X were recut to obtain a more commercially safe R rating. The scarlet letter was superseded in 1990 with the less-desirable, more-avoided, and awkwardly monikered NC-17 rating. Since the original rating allowed many a film to let its freak flag fly and many a filmmaker creative freedom, the Quad invites patrons of all ages to fire up the holiday season with a look back at films that occasioned heated debates over what was deemed adult (albeit not always mature) entertainment.

Schedule through January 5 available HERE. Additional titles to be announced.