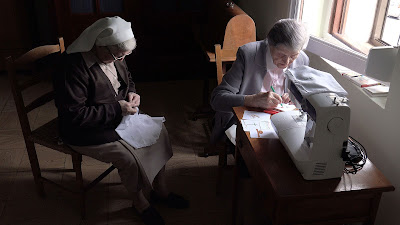 The seventeen octogenarian nuns in Ainara Vera’s See You Tomorrow, God Willing! live tidy, regimented lives in their Franciscan convent tucked away in some nondescript corner of Spain. The mornings are for cleaning, the mopping of floors, the making of beds, the exchange of gossip on the previous night’s aches and pains. As the rest of the world wakes up, they settle into the day-to-day routine of running the place: here two nuns bicker over the quality of the persimmon harvest, here another sister helps a bedridden friend write a letter. Elsewhere a sister mans the visitor’s desk and weaves little tchotchkes for guests costing a single Euro, happily oblivious to the people out front ringing the doorbell. As the days roll by, the sisters continue their lives of prayer, worship, and small talk, their schedules scarcely changing.

But then, that’s part of what drew these women in the first place—the peace, the regularity, the predictability. It’s this private world of faith and sisterhood that Vera attempts to investigate with this film, a documentary which gains much of its charm from its inability to maintain objectivity in the presence of such adorable old biddies. The very first shot of the film stares through an open door into a corridor where various sisters walk by and greet Ainara good morning—one even pauses a moment and tells her she should eat something! By the final shot, a repeat of the first which sees the sisters going to bed, we can hear Ainara replying to their well wishes.

Much of the film is deliberate eavesdropping, and there’s a simple, warm satisfaction to be found in overhearing their harmless conversations about old age and faith. “Living together, you know, is the hardest thing in life,” one of them gently sighs, “While living together, we rub against each other like pebbles in a river. And we polish each other, like rolling stones.”

But the film’s problem is that at only sixty-one minutes, it’s ultimate too short and too unfocused to leave any kind of impact. There are moments of wistful sadness such as when some of the nuns look at old photos of long dead friends and family members, but there’s also a briefness to these scenes that keep them from doing more than simply washing over us. It’s pleasant, yes, but I doubt I’ll remember it in a week.
Posted by Steve Kopian at November 07, 2018