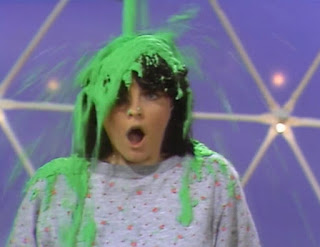 Premiering at DOC NYC this year, The Orange Years: The Nickelodeon Story, directed by Scott Barber and Adam Sweeney, documents the history of Nickelodeon, the first children’s-only television network from its founding through its heyday.


The story begins with Qube, an early cable television system from 1977 that explored interactivity, and one of the team members at the forefront of the endeavor, Dr. Vivian Horner, who began the earliest incarnation of Nickelodeon, a program called Pinwheel. (The documentary makes a point to highlight the numerous women whose insight and talent made Nickelodeon what it was.)

The team from the Pinwheel program went to New York and began the Nickelodeon network in 1979. The documentary starts here, from Nickelodeon’s humble beginnings. Much of the film is centered around the Founder and President of Nickelodeon Geraldine Laybourne, exploring her leadership methods, perspective, and philosophy, and ending with her exit in the late 90s. The Orange Years is thorough, reverent, and interesting with an impressive amount of archival video and printed material to supplement fascinating interviews.

The exposition, in which Nickelodeon’s philosophy and origins is explored, effectively sets up an emotionally genuine and still moving story. It makes every victory for the studio (their first original programming, their studio lot in Orlando, Florida, their foray into animation) feel inspiring and meaningful. Nickelodeon is positioned, both in this film and throughout history, as a contrast to Disney, and the philosophy and execution of typical Saturday morning cartoons. They presented entertainment without condescension, with a hint

of irreverence and rebellion that spoke to children’s experiences. Nickelodeon was an underdog with a team full of talent and creativity that was pushed and challenged by an initial lack of funds and struggles to find programming that created a network that became a powerhouse, and The Orange Years capitalizes on this inspiring underdog story throughout to marvelous emotional effect.

The film explores the creative risks Nickelodeon were willing to pursue in their original programming including Hey Dude, Salute Your Shorts, The Adventures of Pete & Pete, Clarissa Explains it All and Nick News in their commitment to realistically depicting the high and low points of childhood. Their profile of Clarissa Explains It All is particularly interesting, as it shows without preaching or bragging, that boys will in fact watch a show with a female protagonist if it is well-made and speaks to something real.

The Orange Years also explores Nickelodeon’s history with animation Ren & Stimpy, Doug, and Rugrats, their first three animated projects that all became hits, which all subverted of the norms of children’s programming in different ways, while all using top-notch animation, voice-acting, and writing talent.

“If a Show is Good, Anyone Will Watch”

The Orange Years effectively defends its assertions of Nickelodeon’s uniqueness with extensive archival finds including video and printed material, that are both informative and keep the documentary kinetic and energized. The film is also peppered with original new animations that accompany interviewer stories, another sign of the overwhelming effort that went into making this film a documentary that doesn’t simply pander to nostalgia, but is engaging in its own right.

There are a wide range of interview subjects from talent (including Melissa Joan Hart and Kenan Thompson) as well as producers and executives. Most interesting is the insight of the executive production members. Former President Geraldine Laybourne, Former VP of Nickelodeon Scott Webb, QUBE executive Burt Dubrow, Former Creative Director Anne Kramer, figures who may be unknown to the general public, are full of humor, admiration, and knowledge about the channel and its history.

The Orange Years doesn’t entirely shy away from negative elements of Nickelodeon’s existence (the tours of the studio that made young talent feel like creatures in a zoo and infringed upon their private lives, the deterioration of Nickelodeon’s relationship with Ren & Stimpy creator John Kricfalusi due to issues with content, timeliness, and budget.)

Most notable is the bittersweet ending that brings Nickelodeon into the present day. There is a feeling that the film and its interview subjects is holding back harsher sentiments as the film refers to the recent monetary successes that have come from the licensing of Spongebob Squarepants and Dora the Explorer, and an initial commitment to originality and subversion has been replaced with a commitment to monetary gains. Nickelodeon is no longer an underdog, and there is an implication that the company has become stagnant in the successes of the last several years and that without Laybourne’s unique vision the network has abandoned its former philosophy of honesty, experimentation, and creativity.

Sometimes the music is mixed too high, or a conversation on a particular series goes on for too long, but overall this is a near-perfect film that chronicles a revolutionary and inspirational method of engaging with children through entertainment that still resonates with people who grew up with these programs.
Posted by Steve Kopian at November 14, 2018