Over the last decade there has been a steady flow of films coming from Claude Lanzmann cut from the material left out from his legendary SHOAH. Despite being nine hours long there were things that simply didn’t fit. Some of the films were simply fuller interviews of what made the finished films. Other bits were things that simply didn’t make it because they didn’t fit into the finished film. As a result we have ended up with small gems such as THE KARSKI REPORT which hauntingly explains why no one did anything about the Holocaust- they simply didn’t believe the reports; or SOBIBOR, OCTOBER 14,1943,4PM which reveals one of the greatest tales of survival you’ll ever hear.

Joining the historical record is Lanzmann’s latest masterpiece THE FOUR SISTERS. the story of four women who somehow survived the wars. The films are exactly all his others quiet monologues that reveal what exactly happened. Yes, Lanzmann quietly nudges the tale but in all the films we are close on the faces of the women who dredge up a horrific time of their lives. As with all the other Lanzmann films we are at first surprised that the women tell their tales so calmly (relatively), but after a while we fall into their tale and the matter of factness overwhelms us and we are the ones left shaken.

While connected and billed as a series the four films are getting separate screening over several days at the New York Film Festival. Before I saw the films I thought this was a bad idea since I thought bingeing was the way to go. However now that I’ve seen the films I realize that the films are best seen away from the others. The films are such that they must be allowed to stand on their own. They shouldn’t be blended together. More importantly the films need to spaced because they are so quietly affecting that hours afterward you will still be thinking about them. I split up screening the films over the course of a about ten days, two on two days one week and two over two days the next and I found that I was still rocked and affected.

As “one” film they are a worthy companion to SHOAH in that they illustrate bits of history most people probably aren't aware of, more so since the events described are now close to a century old and have been replaced with fears of terrorism and cybercrime. And despite calling many of the enemies of freedom, real or perceived, Nazis or fascists most people really have no idea what the exactly happened. Because people don't really know these and all of Mr Lanzmann's films should be required viewing...unfortunately they are not and I don't think that most defenders of freedom will ever look toward the films, which is sad because they are truly compelling.

It should be noted that portions of each film appeared on SHOAH, however Lanzmann has recut the films so that the interviews run as one uninterrupted tale

One of the threads that run through all of the films is the question of what did people know about what would be called the Holocaust. Time and again Lanzmann asks the women what they knew about what was going on. They all say that they knew on some level what was happening. The how’s and whys they knew are explored in some cases. In the case of Paula Biren some interesting issues of memory since there is an implication that she and those with her in Poland knew on some level what was going to happen as early as the start of the war. Listening to her talk I’m left to ponder if her memory wasn’t 100% clear as to the time frame of events. I'm also left to ponder how our memories work when faced with something horrific as the extermination camps. I should stress that I have no doubt what they say happened did, more I'm left to ponder if the order was jumbled. (A side note- I had been scheduled to speak with Mr Lanzmann during his time in New York for the film festival however an illness forced a cancellation. I had hoped to ask him about the question of memory in the witnesses)

Looking at the titles of each film I was very curious as to what each one means. While not apparent going in the titles do make sense once you get through each film. I will not explain the titles since I would prefer you to discover the meaning on your own. 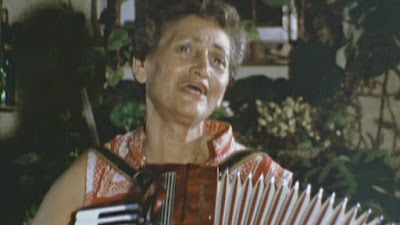 THE HIPPOCRATIC OATH
This was the one film of the four that was given a press screening for critics and was pushed as the one film to see. The trouble is that of all the four films the story of Ruth Elias was the one I remember from SHOAH. While I remember Ruth's singing I also remember her tale of getting married during the time in the ghetto and the complications of being pregnant while in the camps. While it was nice to see her story not spread out over nine hours, this was the film that affected me least simply because her's was a story I still carry with me from the several times I've seen SHOAH 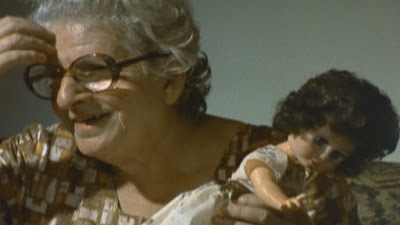 THE MERRY FLEA
Moving film about Ada Lichtman from Krakow Poland who ended up in in Sobibor Concentration Camp. Ada's tale of confinement is notable for the dolls she helped to collect from people coming into the cmp. She helped to prepare them for new owners.

One of the most interesting things about the film is not Ada's tale as such, rather it’s the reaction of her husband who sits largely silent near her. His reaction to what she is saying is a commentary to just how bad thing were. He frequently winces with every sentence. That Lanzmann and his crew thought to record him is monumental because it says so much. It’s kind of like watching Dreyer’s JOAN OF ARC but in real life. It is his reaction shots which add a note of gravity to the proceedings that Ada's matter of fact testimony doesn't always convey. I was left shaken by the film and was haunted for days afterward 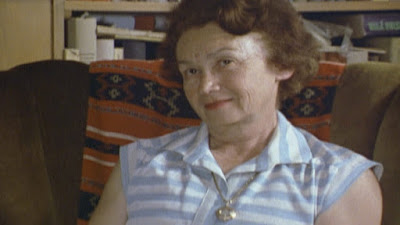 NOAH'S ARK
Sitting with her recently deceased husband’s diary in her hand Hannah Marton from Cluj recounts the story of Hungary’s Jewish population and the extraordinary tale of a handful of them. It’s a such an amazing story that I actually watched the film twice because on some level I wasn’t believing what I was hearing.

The story of the Hungarian Jews is an unlikely one in the face of all horrible things that happened. Since Hungary was allied to Germany they were not invaded by the Nazis until late into the war. As a result the Jews were much less oppressed when compared to what happened to the Jews elsewhere in Europe. When the Nazi’s finally took control in 1944 the Jews were rounded up and shipped out rather quickly. In a move that gives the film its title a number of Jews were given a chance to get out via train. It was a move that would echo down the years as people debated whether it was better that everyone should die together or if some should escape to continue on.

There is a great deal to the story and you need to see it for yourself. As this posts it’s been almost two weeks since I’ve seen the film and I’m still haunted by it and selling it to anyone who will listen.

Easily the best of the the four films and possibly one of the best individual films of the year. 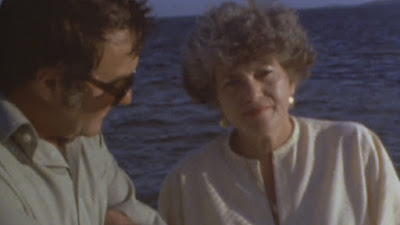 BALUTY
This is probably the most run of the mill of the Four Sisters films. Don’t let that fool you, since it will still hit you like a ton of bricks in the end.

The story of Paula Biren who was a teenager when the Germans invaded Poland. She recounts in detail the existence of one of the ghettos. From the clearing of the designated areas by the Germans of gentiles, through the loading in of the Jews, its functioning and its destruction. It’s a cold matter of fact telling that is similar to other stories that we’ve heard before- however this is probably the first time where we’ve heard the story told by one person who was there from start to finish.

Paula‘s telling is intriguing because she seems at times to be one of the most dispassionate observers I’ve encountered in Lanzmann’s work. She rattles off details with a kind of clinical precision. Her story isn’t something that she tells as if it something she has to sit down to tell, rather she literally takes Lanzmann on a stroll by the sea and tells it to him as if it were a fond remembrance. Its disconcerting and it draws us in. It also provides for one hell of a kick in the end when the mask slips and we see the pain in the final moments.

The films begin playing at the Quad Cinemas November 14th as pairs (BAULTY and NOAH'S ARK on one bill and HIPPOCRATIC OATH and MERRY FLEA on the other.)
Posted by Steve Kopian at November 12, 2018