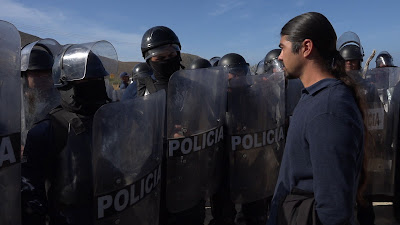 This is the story of the residents of Todos Santos in Mexico who took on a multinational corporation and kicked it's ass.

Wanting to build a huge resort and condo community for the rich a huge multinational started buying up all the available land. The problem is that their plans would engulf the village and diminish the villagers ability to get to the only beach that they can launch their fishing boast from. Worse still the community was so big that the residents were worried about whether or not the complex would siphon off all of the water in the area. Despite being on the water the area has been known to suffer years long droughts which pushed the small community's ability to survive to the limit. With the help of an attorney who wouldn't quit, the residents took on the big corporation.

Going into the film I had no idea how it was all going to turn out. Lately stories like this are gloom and doom so as a result I was hanging on the edge of my seat waiting to see how it as all going to come out. I was not expecting to see how this went and I was absolutely delighted how it all played out.

Crafted like a thriller we are drawn into the story and carried along to the the conclusion. Helped along by some wonderful photography (the images are to die for and I want to go down and ride the boats back on the beach) this is a solid little film that holds your attention and keeps it from first frame. The result is one of DOC NYC's most compelling films