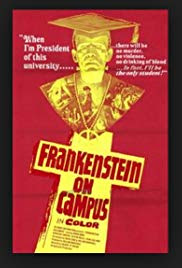 One of the worst films I've seen in ages is a horrible mix of Frankenstein and campus sex film.

After being thrown out of a university in Europe Victor Frankenstein travels to Canada. There he tries to fit in while working on a brain control device with one of is professors.

Long scenes of people partying are mixed with some sex scenes, moments where Victor does weird things and sequences were the students protest the use of computers on the grounds it will dehumanize the world. None of it hangs together despite the fact there are characters in common. That may sound like a no duh statement but at times the various part of this film plays like different films.

This might have been a good bad film except that how Victor Frankenstein is drawn, with a big  stick up his ass, results in a character that grates on us. We don't like him at all and it's painful to be around him. And everything he does is just WTF.

The biggest WTF - and it's the best thing in the film- is the denouncement. Its awesome, it's out of left field and it arrives just as the end credits roll.

This is a burnt turkey of a film and should be avoided.
Posted by Steve Kopian at November 20, 2018

Email ThisBlogThis!Share to TwitterShare to FacebookShare to Pinterest
Labels: horror, mst3k material, not worth the effort, unseen turkey day 2018