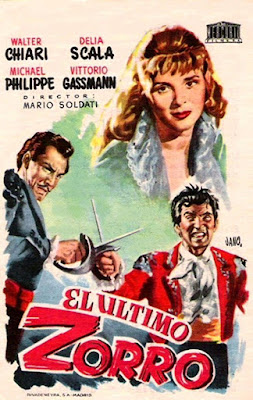 Hands down this is the worst Zorro film I've run across. This Italian monstrosity should be burned where ever it is found.

The grandson of  Zorro is an infantile nudnick who plays triangle in an orchestra. Having so sense of the world he dresses like an over grown child.  Brought home by his grandfather who wants to have him become Zorro. Cringe worthy  things happen.

Bad all around action comedy has horrible jokes, embarrassing performances and weak action sequences. While definitely not helped by a dubbing that gives the young Zorro an effeminate voice the poorly done physical jokes and worse verbal ones just make this film nigh unwatchable.

I will be haunted by our hero's childish dress for years to come. The over done hat and the rest of the costume is the sort of thing you have to see to disbelieve.

I hate this film a great deal.

If you ever run across you'll know you've reached cinematic hell
Posted by Steve Kopian at November 21, 2018

Email ThisBlogThis!Share to TwitterShare to FacebookShare to Pinterest
Labels: italy, not worth the effort, turkey, unseen turkey day 2018, zorro