One of 2018's best The World Before Your Feet opens Wednesday 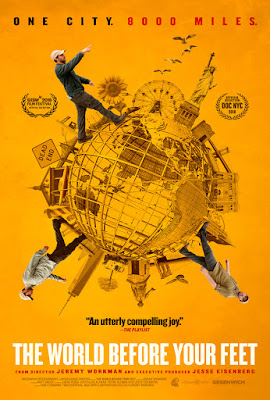 This is the original review of THE WORLD BEFORE YOUR FEET WHICH ran when it premiered at SXSW. I'm reposting because it begin it's theatrical run Wednesday which means you too can see it's wonders.

This is a two part review. The first part is the review as written right after seeing the film. The second part is an addendum written a week after I first saw the film

Jeremy Workman is one of the best filmmakers I've run across. He finds these wonderful off the beaten path people and makes absolutely compelling films that change the way you see the world. His latest film THE WORLD BEFORE YOUR FEET has just premiered at SXSW and it is absolutely a charmer.

The film is a portrait of Matt Green who has been walking all of the streets of New York City for the better part of the past decade. We watch as he walks the streets, meets people, and takes pictures of what he sees. We also get to know Matt via interviews with friends, family and ex-girlfriends.

You would think that a film about a guy walking would grow tiring but it doesn't. Thank to Jeremy Workman's expertise we find ourselves falling in step with Matt and his crazy walk. Workman makes sure that we are always full engaged by thinking ahead and answering all of the questions we might have at just about the time they pop up in our heads. He's so good at providing answers to everything that despite my initial thought that I would like to do interviews concerning the film, I can not in good conscious think of more than one or two things that aren't addressed in the film.

What makes the film work is that the film isn't just about Matt and his walk but about the city and the people in it. Matt isn't just walking the city but documenting it as well on his website. Researching what he sees he details what the things he sees are on line. Within the film he details things like the movement of the Jewish communities out of neighbors as witnessed by the synagogues being turned into churches, and how the various neighborhoods deal with tragedy as witnessed in the wide variety of 911 memorials. Matt also engages everyone he meets and as a result we get a portrait of the people across the city.

What thrilled me was that watching Matt walk and listening to him explain what he's seen I've been forced to rethink how I see the world. As someone who loves to walk around New York he opened my eyes to a good many things that I always took for granted.

This film has left me speechless. I need to see this film a couple more times to fully appreciate everything that is in it.

ADDENDUM- Thoughts a week after first seeing THE WORLD BEFORE YOUR FEET
Jeremy Workman is a genius.

Yes I’ve drunk the Kool Aid, but if you’ve been following his career since the start you’d be in line for a refill as well. No one is making films quite like his and as a result we are the better for it. His films are not one and done, “what’s next?” affairs. They are fascinating portraits of outsiders who are revealed to be not so outside.

In MAGICAL UNIVERSE he profiled Al Carbee, an artist he stumbled up during a trip and who sent him hours of video tapes. It’s a weird and wonderful portrait of guy who wonderful art with Barbies. In his short ONE TRACK MIND he profiled Philip Ashforth Coppola who is drawing all of the subway stations in New York. For anyone who has ever traveled around the city via subways it’s an eye opening experience. Coppola forces us to reevaluate what we see every day and our notions of what art is since be suddenly see the true beauty of something incredibly utilitarian. This film is currently being screened as part of a show of Coppola‘s art at the Transit Museum in New York’s Grand Central Station. I attended the show and watched as people walked through the exhibit and ended with Jeremy’s film intending to watch a little and then leave. Instead they stood watching the entire film and then went around the exhibit a second time because they had to go back and see the things they missed. (I know this because I asked and I overheard them talking)

This brings me to THE WORLD BEFORE YOUR FEET. It has haunted me since I saw it. There is something about the film that has stayed with me. I’ve been pondering how Matt Green sees the world. Thinking endlessly about how he linked up the history of the city. Mostly I’m just wondering how much of New York I haven’t seen even in the sections of the city I know.

And I can’t stop thinking about the film.

For me a film should really at least one of two things entertain or inform. World does both. Watching Green wander the city and talk to people is a blast. It simply is fun. We have a genuine good time as we travel along with him. Additionally it tells us things we probably didn’t know. In being a curious person and needing to fill in details for his website Green has become a human encyclopedia of NYC history and we are better for it.

I can’t stop pondering what it has shown me to really think rationally about the notion of “best”. What is best any way , great cinematography? A moving story? I don’t really know. I think it would be easier to say it’s one of my favorite films of the year- which means it’s better than best since Best films are forgotten and favorite films live on forever in your heart. The World Before Your Feet is going to live on forever in my heart and referenced every time I walk New York, which makes it truly something special

Thank you Jeremy Workman for something truly special.
Posted by Steve Kopian at November 18, 2018