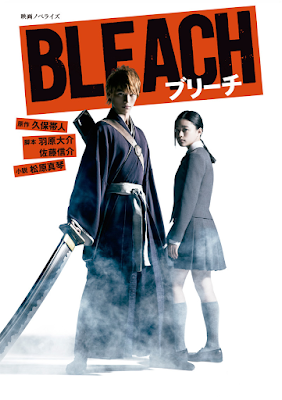 One of the fastest selling tickets at this year’s Japan Cuts was the live action adaption of the manga Bleach. The first live action film following several anime series, features and at least 10 stage musicals, the franchise’s legion of fans were chomping at the bit to see it on the big screen. I couldn’t go, I counter programmed but I was very curious to see it.

Word from the screening was mixed. Some of my friends who saw it didn’t like how it messed with the story. Others weren’t thrilled with the finale which is basically the final 45 minutes of the film. It was too much. However there were others who were through the roof. It was wonderful and magical and just big screen wonderment. I had no idea what I would think when I finally saw it.

With the film picked up by Netflix I got to see the film sooner than I expected and I was delighted by what I saw.

The film is the story of a high school kid with high spiritual pressure. He is able to see ghosts around him. When a giant “hollow” grabs his sister and tries to eat her he intervenes but is nearly killed. A young girl called a reaper and who hunts hollows give the young man her power to defeat the hollow. When it’s all done he is not able to get her power back…and complications result.

This supernatural tinged action film is a blast. I have no idea if it really makes sense but it moves like the wind, has awesome actions sequences and left me wanting a sequel. High art? Hardly just great fun. It is sound and fury signifying nothing which will put a huge smile on the face of any action lover.

I know the current programmers of the New York Asian Film Festival hated the film with a passion but they are dead wrong, Bleach is a blast. It’s just a crazy ass motion machine that held me spellbound for two hours, which says a great deal.

Highly recommended for anyone who just wantsto smile while supernatural being beat the crap out of each other.
Posted by Steve Kopian at November 29, 2018