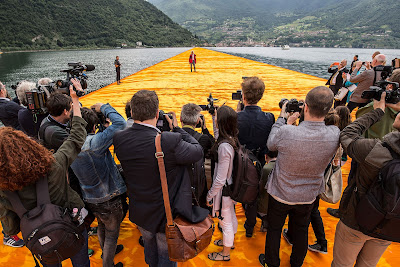 I have a kind of love hate relationship with the artist Christo. I absolutely love the large scale art works he and his wife (now deceased) produce, but I really have no use for the man. Too many people I know had run ins with him during the exhibition of The Gates in Central Park more  than a decade ago that it kind of soured me on his art. It was because I wanted to get look at the man himself that I decided to take a look at the film WALKING ON WATER about his installation Floating Piers in Italy.

Following Christo has be prepares to put a 3 kilometer long walkway across Lake Iseo, the film charts his battles to get the work done the way he feels it should be done and the chaos that resulted when hundreds of thousands of people showed up to "walk on water". (It was supposed to run 60 days but only lasted less than 14)

Watching Christo in action over the course of the film I came to loosen my dislike a bit. He is a rich artist who is used to getting his own way, which means he's a cranky old man at times that needs to be shouted at- as several people in the film do. Its all for a good cause, the art, but he really needs to understand he doesn't always know best.

The film itself is an observational record that puts us in the middle of what happened. Very much centered on Christo the film shows us what he saw and did with out being judgmental.  Its an intriguing trip that reveals what goes into making something like a huge plastic walkway covered by fabric. Its an often visual feast since, lets face it, the project was really cool to look at. I liked the early stuff but once we got to Italy and we watch the set up and what happened once it was opened I was riveted.

If you have any interest in Christo and his work or simply the creation of something cool then WALKING ON WATER is recommended when it plays at DOC NYC later today.
Posted by Steve Kopian at November 10, 2018