Blood in the Snow 2018: Shorts with Features

With each of the feature films at Blood In The Snow Film Festival is also screening a short film. In order to for the films not to get completely lost I’m going to review the films in this post. 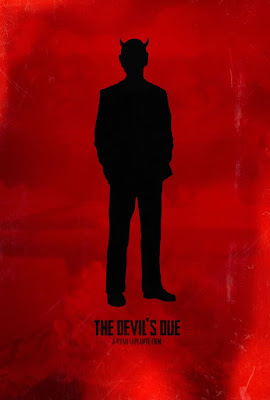 DEVIL’S DUE (playing With SUPER GRID)
Very short film has the devil talking about the hubris and hypocrisy of mankind. It’s a good short but way too brief to say more than that. 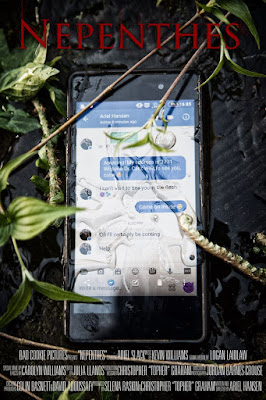 NEPENTHES (Plays with DEADSIGHT)
A young woman agrees to meet an online date at home. This is an okay film that works best as a show of effects rather than as a generator of chills. 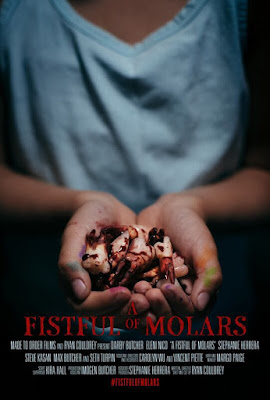 FISTFUL OF MOLARS (Plays With THE HOARD)
A young girl becomes fascinated with the tooth fairy and pulling teeth. Amusing little film has a sting in its tail which I’m not too sure about.

FIRE WEED (Plays with LEVEL 16)
A woman fights to survive in a post-apocalyptic frozen world. Just okay film is a little too good looking -and why exactly are there fresh tire tracks in a deserted frozen world?

GOD’S MAD MEN (Plays with ALTERED SKIN)
A detective going door to door in a neighborhood where there is a rash of kidnapping makes an unexpected discovery. Great looking film is worth a look. 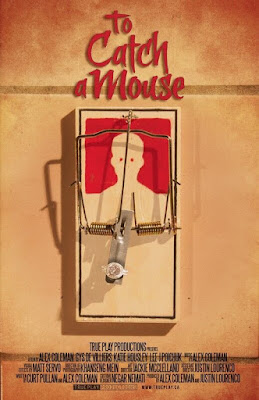 TO CATCH A MOUSE (Plays with ALIVE)
Twisted couple play twisted games. To be honest I remember the Japanese inspired images  more than I remember the plot

DEVIL YOU KNOW (plays with HAMMER OF THE GODS)
How do you deal with a loved one’s addiction when that loved one is addicted to murder? A solid little thriller

HOLY TANK (Plays with MONTREAL DEAD END)
Two friends looking for a missing friend wander in to a bar and get sucked into a game where the loser literally loses his head. Okay time killer isn’t anything special.

IDEE FIX (Plays withFUGUE)
Sam goes looking for Lana after being left on the side of the road. This more interesting for its technique rather than what it achieves.

PENNY WHISTLE (plays with ISABELLE)
After following a penny whistle a little girl is followed by a strange creature. One of the best horror shorts I’ve seen in 2018. It is a beautiful balance of horror, technique and commentary. It’s a neat little thriller and worth hunting down.
Posted by Steve Kopian at November 23, 2018