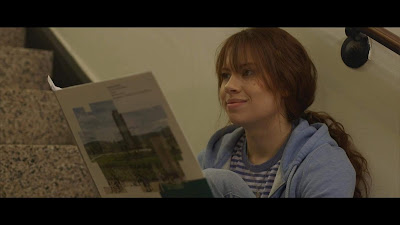 Following a discussion in one of her high school classes a Christina decides she would rather be beautiful instead of pretty. Taking steps to make that happen she eventually ends up meeting a photographer…

This excellent short film about how we perceive ourselves and how others perceive us packs an emotional wallop. Because nothing terrible happens (sorry spoiler) filmmaker Nicholas Goodwin keeps this grounded and real. Also helping is that Christina Goursky as the girl at the center of it is herself beautiful. Making her just as lovely as the girls she thinks is more beautiful than herself allows us to see ourselves in the story. If she doesn’t see herself as beautiful then the rest of us who feel similar may also be beautiful. It forces us to consider how we think about ourselves.

A great addition to the film is Timothy J Cox as Christina's‘s father. Playing the sort of dad we’d all like to have Cox is the moral center of the film and the rock to which Christina is tethered. Its not a showy role but it is an important one that keeps things things real as opposed to just being a movie.

This is a solid film and worth tracking down.
Posted by Steve Kopian at November 16, 2018