What exactly is a Chris Marker film? With Marker you can never tell since whatever he puts together you can be damn sure it’s not going to be exactly what you think it is, even if it mirrors something you think is pretty standard. Such is the case with Marker’s The Owl’s Legacy, a 13 part five and a half TV series about Ancient Greece and it’s connections to the modern world. Yes ,it looks like your typical series but it is in fact something much headier and thoughtful than almost anything that’s ever played on TV.

Marker’s film (or is it films?) seeks to connect ancient Greece with today. How have we taken what is considered the ideals by which we have built our civilization operating today. How much has actually survived? How much was real, how much was just an ideal? Marker begins with those ideas and then works outward. Starting with the idea of the discussion, a symposium, Marker works out to tackle notions like the Olympics in which he explores the idea of a perfect Greece/society and whether it ever existed. His discussion of democracy ponders, among other things, how we saw Greece as a free society when 90% of the inhabitants of (I believe) Athens were actually slaves for the other 10%. And there is more-a great deal more that will have your head spinning.

I loved every minute, even as I went into information overload. There simply is too much to take in in one sitting. Part of it is it’s a flood of facts and part of it is a processing the material. As you watch the series, or even just an episode, it begins as simply a discussion of ancient Greek and then Marker begins connecting things up to history, and more modern times… and then as the episodes go on you start to connect them all up and you feel the literal weight of history crushing you.

At this point I’m going to tell you a secret I haven’t finished the series yet. I know I shouldn’t be reviewing the series without going to the end but there is simply too much. I watched two episodes at lunch at work and then I binged five more when I got home and as much as I wanted to keep going I had to step away. It was just too much to consider. Yes it was great to binge something this smart and heady, but it was so much things started getting lost. I had to take a break in order to organize my thoughts and a of the information I took in. I will be going back to the series but not soon enough to be able to get a review up for the theatrical release that begins today at New York’s Metrograph or for Icarus’s DVD release which happens November 13th. I need to get a little distance and process. Then I have to back up an episode or two and then dive in.

While it should be clear that The Owl’s Legacy is highly recommended, the question remains whether or not you’ll to see it during the Metrograph’s theatrical run where it is being run in a six hour black with two intermissions. If you want to deep dive into the discussions absolutely. This is a series that will get your brain firing on all cylinders. But if you think you’re going to need additional time to breathe and ponder you may want to wait.

But do yourself a favor only wait until the series comes out on DVD and then pick it up and give the series a go at your own pace. Do it because it is really good and more importantly it will help you make sense of today’s world. 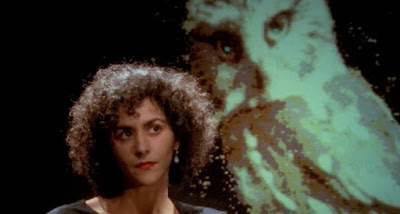