Jonathan is in theaters and on demand 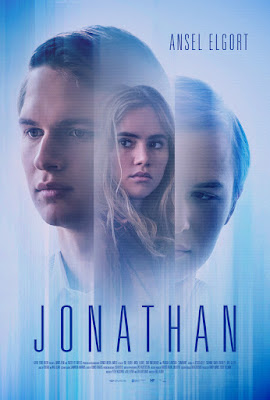 With Jonathan out in theaters here is a repost of Joe Bendel's review from Tribeca.

They are like the Corsican Brothers, but more symbiotic—and weirdly codependent. They do just share a flat and some DNA, they cohabitate in the same body. Each gets his own shift from 7:00 to 3:00. If you question the sustainability of this arrangement, your skepticism will be validated in Bill Oliver’s Jonathan, which has select theaters and On Demand services.

Jonathan is the tidy and responsible one, who gets the day shift. John is the sloppy but social one, who lives by night. Obviously, they can never be present together, but at the end of each shift they leave each other video messages, recapping their interactions with people, so they will not be caught flatfooted during their shifts. However, John has been out of sorts ever since Jonathan read him the riot act about pursuing a long-term relationship with Elena, a pretty young waitress completely unaware of their condition.

Much to Jonathan’s alarm, John stops leaving messages. He is even more concerned when he discovers their doctor and surrogate mother, Dr. Mina Nariman has been treating John for depression. However, he really starts feeling guilty when he pursues his own relationship with Elena.

Jonathan is billed as science fiction, but the radical treatment the J-men have undergone does not feel very speculative at all. To an extent, the film plays like a more innocent cousin of Philip K. Dick’s A Scanner Darkly. Nevertheless, the fraternal relationship and the rules they embrace or chafe under to make their co-existence possible are intriguing and inherently dramatic. Yet, the film is never mind-blowing in the way it clearly hopes to be. Despite a few fresh wrinkles, the multiple personality subject matter is largely confined to familiar territory.

Still, Oliver’s execution is tight and stylish. He is particularly adept at conveying Jonathan’s closely guarded emotional state. Ansel Elgort and Suki Waterhouse also give career-best performances (thus far), which might sound like a bold declarative statement, but it based on an underwhelming field of films, including November Criminals, The Bad Batch, and the “Ent” franchise.

Credit is still due, especially for Elgort, who clearly delineates Jonathan, who provides our sole POV and John, seen only in video messages, without ever resorting to cheap tics or tricks. Of course, Patricia Clarkson is always reliable, but she really deepens the film with her subtle but forceful portrayal of Dr. Nariman. If anyone earns award consideration for Jonathan, it will be Clarkson, but Shunori Ramanathan should earn consideration for bigger roles for her sensitive turn as Jonathan’s concerned co-worker, Allison.

There are some obvious logical questions Oliver co-screenwriters Peter Nickowitz and Gregory Davis just hope viewers do not think to ask. Yet, there is something about the synaptic Cain and Abel relationship that resonates on a gut level. It will not stretch your mind or your consciousness, but it will get under your skin. Recommended on balance for the ensemble work, Jonathan is now out in theaters and available on demand
Posted by Steve Kopian at November 20, 2018