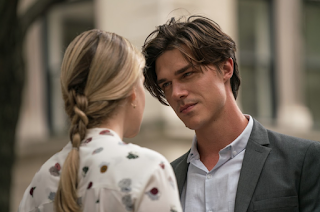 To be honest I don’t know what I think of Write When You Get Work. I like sections of the film, I love that it is decidedly atypical in construction subverting expectations but I still don’t know if I like it.

The film is about Jonnie and Ruth were teenagers crazy in love. Over time they drifted apart. Years later when Jonnie is between jobs (some of which are legally questionable) he sees Ruth who works at an elite prep school. As the pair rekindle their relationship Jonnie begins to worm his way into the rich people around her.

Odd mix of romance, comedy and a heist film is peppered with people who aren’t really nice. Sure we are supposed to find some of them charming but ultimately they aren’t really the sort of people we want to hang out with (Jonnies friends are bad people and Ruth’s are bad people with money). Jonnie hangs out with some bad people, and really isn’t a stellar person. While that isn’t always an impediment to liking the film it makes it tough to give yourself over to the romance with Ruth because you know he is going to break her heart, if not at the fade out a couple years down the road.

There is a grittiness and realness to the film that I like. While having people you don’t like makes the romantic part of the film tough to take, for the other parts of the film it works gangbusters. The heist stuff works pretty well and it held me when my attention for the rest wandered.

Beyond that I’m not sure what I think. While the film gets points for being a film that isn’t a typical romance, I don’t know what I feel. Yes I stayed to the end to see how it played out, but at the same time I felt no real need to stay other than the mild curiosity.

Is it worth seeing? If you want an off Hollywood film most certainly. If you want something that will be you next favorite, probably not.
Posted by Steve Kopian at November 22, 2018