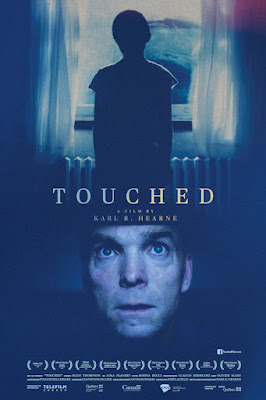 TOUCHED is exactly the sort of film Unseen Films was started to highlight. A small hidden gem of a film that is more than likely never going to appear on your radar. Never mind that the film was hit on the festival circuit and is getting a week long run in Toronto starting Friday, Touched is wrongly not on anyone’s radar.

Explaining the plot is tricky. This is a supernatural tinged mystery of sorts that requires you not to know too much since it works best not knowing anything. I think the best way to explain it is that it involves a lonely landlord who is investigating what happened to a missing tenant and his relationship with a mysterious 9 year old girl. (And no there is nothing sexual here-get your mind out of the gutter).

Low key brooding film is all about the people. There are no flashy effects, just actors. So since this is a character driven film the cast has to be up to the task and in Touched they are. Headed by Hugh Thompson as the landlord at the center, the cast kicks ass and takes name. They all grab us and pull us in. Even with ghosts walking around we believe everything that happens because they are that good.

This is a really good little film. It is moody and moving and it needs to be seen. It is a small little gem that is the perfect antidote to the big Hollywood money pits. TOUCHED is the sort of small film you’d search out if you knew it existed. Well it does exist and now is the time to go search it out.
Posted by Steve Kopian at November 13, 2018