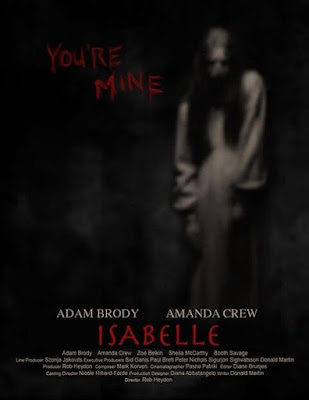 Larissa and Matt Kane's lives are spun out of control when an evil spirit tries to take over the life of Larissa by swapping existences with her.

Okay horror film has great visual style and moments of real chills but the film suffers  over all from a sense of having been here before.  This is yet another film about a young mother who seems crazy but is hunted by a dark force film that only really shines in some of the creepy moments such as Larissa seeing her dead baby come to life, the evil spirits in the window and similar bits. Its not that the rest of the film is bad, more that the inventiveness shown in the horror moments wasn't really used in the linking material.

I don't hate the film, but I find the pieces are better than the whole because the linking material allows us to chart where this is going way ahead of the characters on screen.

Worth a look, but nothing really special.
Posted by Steve Kopian at November 26, 2018