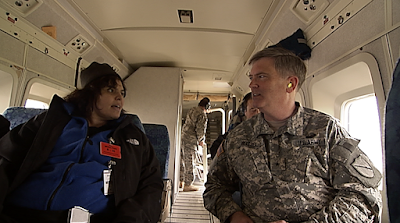 Director Judith A. Helfand takes a Michael Moore style look at global warming beginning with a look at what happened in 1995 in Chicago where almost 1000 people, largely poor old and non-white, died in a heat wave. From there she examine how the rich and powerful are controlling the debate and remaining less affected than the rest of us.

A good subject is hurt by a reporting style that is much to similar to that of Michael Moore. While it is nice to admire the work of one of the best it's usually best not to steer so close in your presentation that all the audience can think about is making comparisons. (You'll be saying hearing the narration in Moore's voice). The film also has some of the same problem as  Moore's films in that COOKED drifts in and out of being straight reporting and being an essay and the tones wandering around.  They are flaws that of late has made some of Moore's films less required viewing and COOKED as well.

While not bad, COOKED never quite comes together.
Posted by Steve Kopian at November 13, 2018