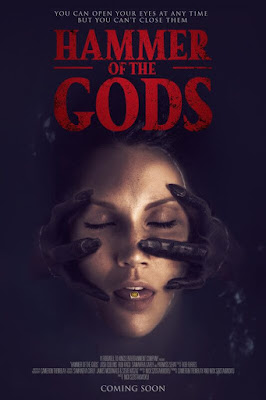 A rock group follows it's lead singer into the wilderness in order to drop acid and work on their next album. Meeting up with a group of girls they meet on the shore they head off down river on a spiritual journey that quickly turns black as things go wrong and something appears to be stalking them.

Okay horror film never manages to generate the tension needed to be truly scary. Blame the slack pacing which fails to grab us the way it should. We've been here before and without a tighter grasp on things we never quite feel the urgency. (It also doesn't help that the rockers appear to be as young as the girls they meet, which is not what you really want from a band that supposedly changed music a bunch of years earlier)

While never bad, it never thrilled and when it was done I was ready to move on to the next film immediately.
Posted by Steve Kopian at November 24, 2018