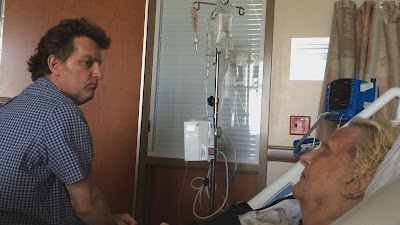 BLEED OUT, in a lot of ways, is the perfect distillation of all that is wrong with the medical industry. It clearly shows how the drive to make money at all costs is literally killing people. I just wish it was packaged slightly differently.

Medical misadventures is the third leading cause of death in America but medicos refuse to allow it to be listed as an actual cause of death lest no one go to them and their insurance premiums go completely out of sight. The people we go to help us in our time of need are literally killing us because of the way the administrators and insurance companies are driving them to make money. For example instead of having doctors on the floor of an ICU the patients are monitored remotely (in --- tale in another location far away) via cameras and then when the machines say something nurses are sent in. Clearly it’s a money saving idea doomed to spawn lawsuits.

Bleed Out walks us through all the problems with medicine in today’s world via the story of filmmaker Steve Burrows‘s mother. She fell and broke her hip and had to surgery, however her trusted doctor botched the operation and they had to operate again. However instead of waiting for a blood thinner to clear her system he operated anyway resulting in her bleeding out and going into a coma. From there things get worse and everything ends up in court. Burrows was filming all along the way and what he shows us will shock the shit out of you. Even if you know how bad it can get, you will b shocked- I was.

As a document of just how bad things can be and how willing to protect each other doctors are, Bleed Out is as good as they come. Burrows show lays it all out and leaves us a staring blankly at the screen. If any other industry was doing some of this shit and killing this many people the government would be stepping in to stop it, but things are allowed to blindly roll on as people die…

…no wait the government in some states has stepped in to put a limit on medical malpractice payouts. The idea is to prevent frivolous lawsuits and payouts but in reality it results in people not suing since its now a rigged game- any money you win (an amount way less than you would ever need) will go entirely to the lawyers. I wanted to throw up.

At its heart Bleed Out is a film that hopefully will provoke change, both in the care of Burrows‘s mom and on a larger level.

However as shattering as the core story is, the presentation sometimes works against the power of the story. It can be a little too light. I blame it on Burrows‘s day job as comedy writer, director and performer. While there is nothing wrong with keeping things light, it drifts a tad too much in to the Michael Moore style of delivery which doesn’t always give the desired effect.

Quibbles aside Bleed out is a must see. It plays November 13 at DOC NYC and will play December 17th on HBO. Either way see it and then contact you lawmakers and make them force changes which will prevent this sort of thing from happening to our loved ones.
Posted by Steve Kopian at November 12, 2018