In the days when I was preparing my coverage of DOC NYC several politically motivated tragedies and near tragedies rocked the country as bomber tried to get his point across by blowing up the political enemies of his leader and in Pittsburgh a man walked into a synagogue and shot 11 people because he was angry at the Jews for some sort of plot. The attacks, along with President Trump’s thoughtless words on anything that wasn’t in line with his self-image of greatness, had and have left everyone feeling broken. Perhaps not so surprisingly I found a way to not let the darkness close in thanks to two similar films, both must sees, playing at the festival.

A day or so after the shooting in Pittsburgh I randomly picked the film EXIT to watch and review as part of my coverage of DOC NYC. The film, a look at true believers who left their causes of hate was made by Karen Winther, a one time member of the neo-nazis, who walked away. Winther needed to talk to other former believers and find out why they left and how they are coping with the change of headspace. The film rocked my world. Its raw, imperfect look at the effect of hate on the hater stuck with me. As I do with any film that hits me like that I started emailing and texting friends to see it. In an environment where hatred and fear, the film cracked the darkness and revealed that all the people who hate with all their hearts might find a way into the light. 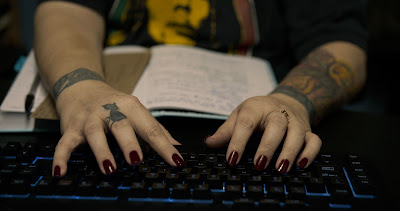 In an age when closeted frustration has burst into open rage and murder, and it seems as though we are going to hell because we are too stupid to see how foolish and wrong we are, EXIT presents an intrigueing notion, namely that the most hardcore of believers can change and realize that the people they hate are people too.

The film follows director Karen Winther, a former neo-nazi, as she interviews former true believers and people caught up in that worls to find how they left the groups that once were the center of a hateful life. It is a moving trip that shows how very often the kindness of strangers can change the world.

The true believers telling their stories moved me. While they present no easy answers, all are still struggling with the shift out right hate to tolerance, their stories all present a kind of  hope. If these people can change so can pretty much else.

What I like about the film is that it doesn’t give us easy answers. Yes there is hope but at the same time Winther recognizes that changing the minds of people who hate isn’t going to be easy. As I said all of the people interviewed seem to still be fighting with change of world view even years on. Things were once so much more simple to see the world as us and them.

While is is not perfect (it could have used less talking heads and more of a support group that is in the latter part of the film), EXIT is still a kind of rough edged masterpiece. It is complex film that will make you deeply and think and feel. It is a film that will haunt you for days after you see it. I saw it two days after the arrest of the mail bomber who tried to kill President Trump’s “enemies” and the shooting in Pittsburgh which was a time when I was feeling low and it helped to pick me up. At a time when it seemed that the world was growing darker the film reminded me that people can change and it provided a little light. 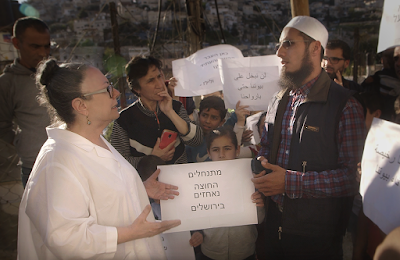 A few days later I again randomly picked a film to watch while having lunch I picked another film that rocked my world. The film AFTERWARD is by Ofra Bloch a psychoanalyst who wanted to confront the notion of hate within the Jewish/Palestinian communities. She wanted to know what the effect of the hatred was on both communities since she realized that she had been raised to hate Germans because of the Holocaust and to hate the Palestinians because "they were coming to take their land". She soon realized that part of the problem of why she hated these people was that there was no dialog between the groups. Not only hadn't she spoken with Germans or Palestinians- many Germans didn’t know how to talk to Jews because they were afraid the sins of their fathers would get them hurt, while the Israelis and Palestinians seemed to only interact violently. As a result no one talked and the uncertainty bred suspicion and uncertainty. To break the ice she would talk to those she was supposed to hate and hate her.

AFTERWARD is even better than EXIT.

Ms Bloch has made a film of such incredible power it has left me tongue tied and rambling...

Digging deep into her own life and family Bloch explains takes us on a journey to understand why and how the hatred has been allowed to fester. She gives us example from her own family how stories as a child didn't fully allow her to understand what happened during World War Two. In order to put things right she goes to Germany and into the occupied territories and talks to people and experiences what things were/are like.

And what she finds is troubling. People can not move forward from their own and our shared history. The Holocaust, which sought to eliminate the Jewish people is being used against the Palestinians as a way of shutting them up. The Palestinians don't like that their "oppressors" are portraying themselves as victims in a way that makes it impossible to fight back back. The displacement of the Palestinians, the Nakba, where a million or more people were displaced in a single day, is still an open wound. Part of the reason being the rules laid down by Israel which make the basic process of living difficult even to the point where they can not bury their own dead.

Bloch is confused by it all at times, but she, and we, begin to gather some answers over the course of her journey.  Working slowly and patiently she begins to find through lines. There is perhaps a way to begin to heal some of the wounds.

The journey is AFTERWARD and it is an unconditional masterpiece.

I honestly don't know what to say. This is a film I need to see again to due it justice, but because of the sheer weight of the DOC NYC I am going to have to circle back after the festival and take a more detailed look. But you shouldn't wait-you should just go see it.

Know that Bloch succeeds in taking a complex subject and making it personal. By relating everything back to her own experiences she makes her journey our own.  We feel her confusion because she makes us understand where she is coming from. Bloch also doesn't shy away from mixing heady subjects with emotion your hear will breaking at some revelation while your brain ponders what it all means..

That this is Ofra Bloch's first film is truly amazing. How this person has managed to make a film of such staggering power the first time out of the box is mind blowing. No filmmaker I can think of, male or female, has ever made a film as nigh perfect and as deeply affecting as this one the first time. Watching the film I kept to IMDB to see what else she has done and only to discover this was her first film.

In a time filled with hate and mistrust and a world on the edge of collapse from all the pain, AFTERWARD is a shining beacon of hope.

AFTERWARD is a must see film for everyone.
Posted by Steve Kopian at November 07, 2018