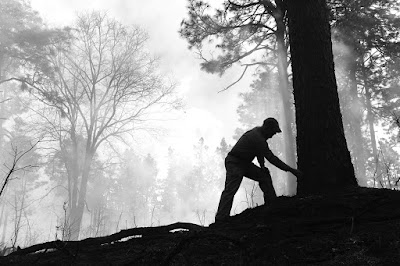 STARS IN THE SKY is one of the best films playing at DOC NYC. A beautifully photographed love letter to the environment it is a film that expertly explains that hunting is not really the nimrods who hunt lions in Africa or are photographed doing stupid things on You Tube but in reality something more complex.

Beginning with a gorgeous drone flight through the wilds of Alaska the film sucks us in and quickly becomes a philosophical position paper about what hunting is and is not. Through a series of interviews with hunters who love the land and the animals they hunt the film takes the position that hunting for food is part of life. It is not a matter of random hunting and killing for the hell of it. It is a way of communing with nature and when done correctly, an aide to maintaining healthy populations of the animals hunted.

Certain to be controversial, animal rights activists and those who oppose hunting for other reasons won’t like the film. They will not be moved that hunting is evil no matter what the reasons behind it or how it is explained. It’s kind of a shame that they will no doubt dismiss the film out of hand because it’s clear in listening to the people interviewed that most hunters have a deep love and respect for the animals they hunt. It’s also clear that despite what they think it is not merely a matter of blood lust behind the killing.

Director Steven Rinella has made not only a film that is not only an intellectual tour de force but a visual one. Filled with stunning shots of the wilderness and the animals that live there STARS IN THE SKY fills us with the emotion that those who love the environment feel when they are out in the forest away from the world at large. By actually seeing the places where people hunt we come to realize  the connection they have to nature and how for most people it isn't a matter of just taking a life but something more.

While hunting is not something for me, the film filled me with respect and admiration for those hunters who respect the environment and the food they hunt.

Highly recommended this is a jewel of a film.
Posted by Steve Kopian at November 08, 2018