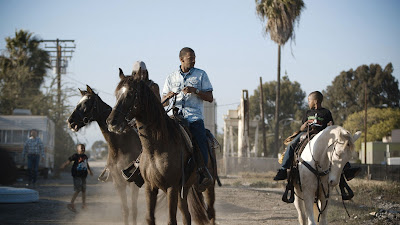 FIRE ON THE HILL: THE COWBOYS OF SOUTH CENTRAL
Intriguing look at three young black cowboys living in South Central Los Angeles who fight to preserve The Hill, the last public stable in the city.

A super look at a part of life that most of us don't realize exists. It is an uplifting tale about three young men trying to keep off the street by keeping a tradition alive.  This is a small gem of a film that is better experienced than talked about. Highly recommended.

SEE KNOW EVIL
Portrait of photographer Davide Sorrenti who died while in his 20's. Sorrenti  had developed a rare blood disease as a child that should have killed him before he was five but he managed to hang on to become an influential image maker  who popularized heroin chic.

While I admire his images I really didn't care about his life. Honestly I've always heard he was a street kid who made good and I admired him pulling himself up, but my feelings were kind of dampened when I discovered that some doors were opened because of his parents which takes nothing away from his talent but does diminish the tale of the self-made man somewhat.

As for the film its a bit too in love with its subject with seemingly everyone having nice things to say. There also really isn't enough to this story to really warrant a feature portrait so I kind of drifted off after awhile at the sameness.

Worth a look for fans only.