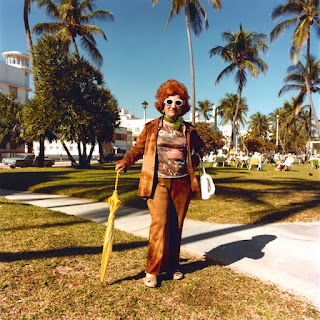 THE LAST RESORT vexes me- what is the film really about? I'm not really sure.

Nominally the film is a portrait of Miami Beach and it's time as a haven for older Jewish retirees. At the same time the film also wants to be a portrait of photographers Andy Sweet and, to a lesser extent, Gary Monroe who chronicled the decade or so long period.

While I liked learning the history of the city, I'm not too sure that tying it into the story of Andy completely worked. The problem is that as good as Andy and Gary's photographs are they themselves aren't as interesting as the story of the city and the migrations of the various ethnic groups. They are kind of non-entities about whom we learn very little. Gary is a nice person but never really says anything about himself and while everyone talks about Andy we get no sense of who he was other than this guy who took pictures, who may have been gay and who was murdered. While I can tell you a great deal about the lives of the people photographed I really can't say much about the photographers- and that is a problem since they are half the film.

My over riding feeling coming out of the film was "yea well... that was something". I'm still not sure what that something is.

Is it worth seeing? If you are interested in the history of Miami or if the people in the photos seem like relatives yes. For everyone else not so much.

I think the best way to describe the film is an interesting misfire.
Posted by Steve Kopian at November 09, 2018