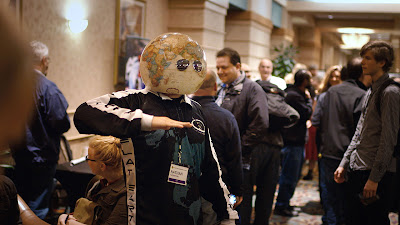 A look at the crazy people who believe the world is flat. Focusing primarily on the reasonably intelligent Mark Sargent, a force in the flat earth movement, the film reveals how seeming normal people are believing the nonsense.

Don’t come here for a real debate about the loopy ideas, rather just be prepared to watch as the they explain why they feel as they do. It’s a hell of a ride and will make you fearful about humanity since clearly they neither understand science nor do they really have any evidence (Sargent’s insisting that planes don’t fly over the ocean between Africa and South America is proven instantly false using the same computer program he used) but they are going with it. It’s not really surprising since the dopiness of the belief fits perfectly with this age where too many people think there are grand conspiracies at work (think some of the 9/11 tales) and only those in the know have cracked the truth. I had been delving into the beliefs before seeing the film and I was willing to just think they were a small group of nuts but after seeing this film I am forced to openly wonder how we, as a species, have made it this far since I was forced to realize how incredibly stupid humanity is. No wonder the world seems doomed.

Highly recommended for anyone who wants to see the face of the fringe or become depressed at the fate of mankind.
Posted by Steve Kopian at November 09, 2018