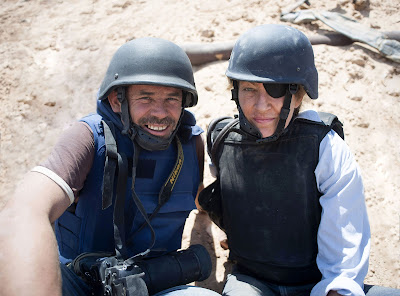 Under the Wire recounts the final trip of legendary reporter Marie Colvin. Colvin along with photographer Conroy snuck into Syria in 2012 to find out what was going on. Ending up in the city of Homs, the pair soon found themselves in the thick of battle…and eventually in over their heads.

The tale is told by Conroy who grabs us and pulls us close. His story is supplemented with photos and video shot on the trip as well as the recollections of friends and others who were there. This is storytelling at its best.

…the trouble is that as a film it just misses being great. I mean it’s a hair’s breadth of being one of the great films of the year but it just misses.

The problem is the film is simply the story of the ill-fated trip into Syria. While there is a token attempt to give a back story, it isn’t enough. We never get to know Marie Colvin except on a cursory level. While going in I knew who she was from her reporting, I didn’t know the woman. The film paints her not as a person but as kind of hell-brand mythic figure. While there is no doubt that was what she was, there had to be more to her then the legend. There had to be more to her and her story than what we see.

Don’t get me wrong I really like Under the Wire but I wanted to love.

Regardless of my quibbles the film is definitely worth seeing. It pays Saturday November 10 at DOC NYC and then opens in theaters on the 16th

(The same story is being told in a Private War a film featuring Rosamond Pike as Colvin which is in theaters now)
Posted by Steve Kopian at November 08, 2018