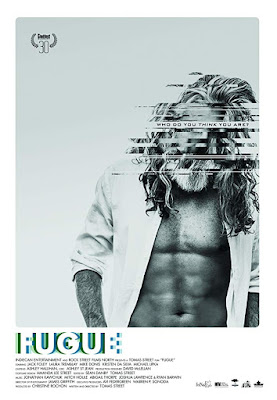 Despite playing at a horror film festival FUGUE is not a horror film. Its is a thriller... though one that is nigh impossible to describe and discuss without revealing too much.

The basic plot has Malcolm waking up not knowing who he is. His wife tells him he has had an episode that has wiped his memory. As she begins to tell him about who he a friend drops by and he too begins to fill in details of his life... and then things take a turn...

I don't want to reveal too much. You'll be able to figure bits of the most basic plot from there but its what happens in the details that I'm trying to protect since whether you like or loath the film will depend on how you react to those details.

I will say that this is not a horror film. The only monsters are the human kind. If you go in knowing that what you are getting is more natural than supernatural you'll be fine.

As for me, I like the film. Is it great? No, but it is entertaining and suspenseful which counts for a great deal. That the film works as well as it does is due to the well written script and the performance of Jack Foley as Malcolm. He holds the film together when some of the performances drift in and out.

Is it high art? No but you won't mind taking the time to give the film a go.
Posted by Steve Kopian at November 26, 2018

Email ThisBlogThis!Share to TwitterShare to FacebookShare to Pinterest
Labels: canada, The Blood in the Snow Canadian Film Festival 2018, thriller