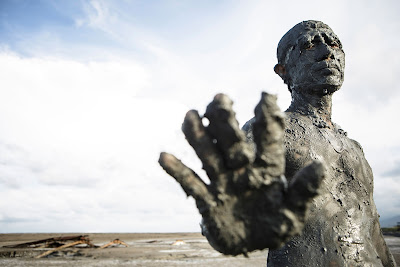 The title of Cynthia Wade and Sasha Friedlander’s new documentary Grit is a pun. One the one hand, it refers to literal grit, as the film centers on the aftermath of the Sidoarjo mud flow. Thanks to unsafe drilling practices, Indonesian oil and gas extraction company PT Lapindo Brantas accidentally triggered the eruption of the world’s biggest mud volcano in an impoverished area of East Java in May 2006, resulting in an environmental cataclysm which, even a decade later, spews up to 180,000 m³ of mud daily. Scientists estimate the mud flow will continue for another 25-30 years, all the while poisoning ecosystems and displacing nearby communities. The initial explosion swallowed 16 villages near the doomed drill site, leaving over 60,000 people homeless. It took a decade for the survivors to get full compensation for their lost property, as Lapindo tied up the legal process with claims that a) despite being a multi-billion dollar company they didn’t have the funds for compensation, and b) the eruption was caused by an earthquake some 180 miles away from Sidoarjo, so they weren’t actually culpable.

Here is where the second meaning of the title Grit comes in: the indomitable spirit of the survivors fighting against the corrupt Indonesian government and the smirking, sneering Lapindo executives. Though it focuses on a panoply of survivors—artists, activists, teachers, laborers—the main figure it keeps returning to is a fourteen year old girl named Dian whose father worked for Lapindo and died of cancer complications a year after the eruption. It charts her awakening as a political activist, organizing protests with her fellow school students, attending rallies, and finally going off to college for a degree to help her community.

Shot over six years, the film captures numerous set-backs and indignities thrust upon Dian and her fellow villagers—the most heartbreaking being a presidential candidate who runs a platform guaranteeing the Lapindo survivors full compensation only to immediately renege upon being elected. But Dian keeps moving forward, tirelessly, ceaselessly.

There have been several documentaries at this year’s DOC NYC festival grappling with environmental and economic injustice, but none have captured the earnest spirit of optimism better than Grit. It has no illusions that these problems will one day vanish; it will require lifetimes of work and sacrifice. But justice will come, even if it takes one step back for every two steps forward.