Supergrid opens this year's Blood in the Snow Film Festival 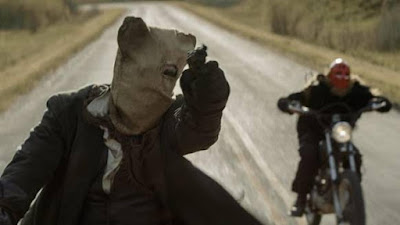 I'm going to run a full review when SUPERGRID hits theaters in December but since the film is opening the Blood in the Snow Film Festival and since it appears tickets are still available, I just wanted to say BUY TICKETS AND GO.

SUPERGRID is a post-apocalyptic action film about two brothers who have to make a run along the highway known as the Supergrid. A lawless stretch of road bandits kill and rob anyone they meet while the pollution created by a giant mining operation is slowly killing everyone.

Its a grand low budget action film with great characters and action. Its the sort of film you curl up with some friends, popcorn and a beverage of choice.

Trust me you want to see this, and with tickets still available for the BITS screening you can get on the bandwagon sooner.

For tickets go here.
Posted by Steve Kopian at November 21, 2018

Email ThisBlogThis!Share to TwitterShare to FacebookShare to Pinterest
Labels: The Blood in the Snow Canadian Film Festival 2018