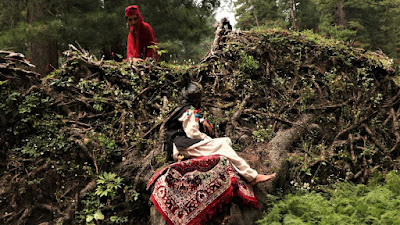 Laila, a beautiful young woman is given in marriage to young man who could lift a certain stone. Wary of her husband, who she sees as little more than one of her sheep, she goes with him to his village where she is hit upon by two police officers who lust after her. Finding her husband, less than useless, she must decide for herself what to do.

Based on folk tales and the the life of the Kashmiri mystic Lalleshwari who wandered off into the wilderness to get away from the intrusion of men and whose refrain opens the film, SHEPHERDESS... is hauntingly beautiful film. Told in a series of perfectly framed shots with an often haunting score this may be one of the most beautiful films I've seen in 2020. Every image is worthy of framing.  It is a film that constantly delights the eye.

I am not quite sure how much of the film works beyond that.  Part of the problem is that the story has been overtly fashioned into meditation on the plight of region of Kashmir which has been the source of a fighting between India and Pakistan. Its not that there is anything wrong in being about the conflict, rather it is a tad too overt for my tastes. Don't get me wrong I do like the the underlying tale of the struggle of a young woman trying to find her place in the world she lives in. I adore the fieriness of Laila and her refusal to let things decided for her. I'm just not certain that the film needs the politics
Posted by Steve Kopian at December 07, 2020