The excellent Two Ways Home hits VOD on the 29th 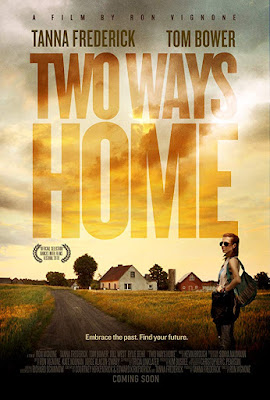 What sets TWO WAYS HOME apart from most other films about going home and finding one’s self is the way the film handles the mental illness portion of the film. A realistic look at a woman with mental health issues the film feels nicely lived in and smells of a summer day in the country.

The film opens with Kathy and her friend robbing a convenience store. Very quickly we realize that something is off. She hearing voices and not behaving rationally. When the cops come she gives up without a fight. While in prison she is diagnosed with bipolar issues and put on meds. When she is released she goes to stay with her grandfather who is having health issues of his own. As she tries to reconnect with her daughter she also attempts to rebuild her life.

Buoyed by killer performances by Tanna Frederick and Tom Bower (who is so staggeringly good you wonder why he hasn't gotten more leads)  TWO WAYS HOME is a small treasure of a film. No, it is not the greatest thing since sliced bread and no it probably won’t win every award out there, but it is a wonderfully warm and fuzzy film with ups and downs that make it feel like life. Watching it I had the feeling that I was back on my grandfather’s farm. As I said above it has the feeling of a life lived. Clearly writer Richard Schinnow and director Ron Vignone have been there and it shows on the big screen.

Recommended for anyone who is tired of typical Hollywood films or stock inde films.