ONCE UPON A TIME IN VENEZUELA (2020) Starts Tomorrow on Topic 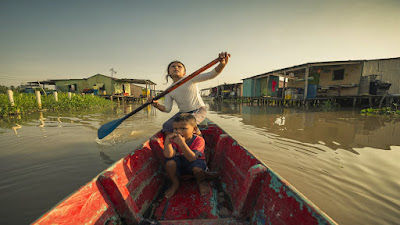 Located on Lake Maracaibo in Venezuela is the village of Congo Mirador. Built on stilts it is a town that is slowly dying. While the lake should be dredged to stop the sentiment to build up, the government instead gives them empty promises. Worse the lake is polluted and there is no hope in sight. However despite it all it is election time and the government people are looking for their support.

This is a beautiful film of a way of life that is slowly disappearing,  ONCE UPON A TIME IN VENEZUELA will haunt your dreams. As music mixes with slices of life takes this film puts us firmly into the lives of everyone we see and we are better for it.

All hail director Anabel Rodríguez Ríos, who returns to the village after several other film projects, and which resulted in a familiarity that allows us outsiders to get up close to the people on screen. This is a rarest of films that make us truly feel that we are part of what is happening on screen.
There is much to consider here and I need a second time through before I can fully unpack all the film has to say about community, corruption, pollution and poverty. Until I can give it another go and truly form my thoughts I suggest you take the time and see the film for yourself.
Recommended.
Topic is available to U.S. and Canadian audiences on Topic.com, Apple iOS, and AppleTV, Android, Amazon Fire TV and Roku, in addition to Amazon Prime Video Channels.
Posted by Steve Kopian at December 30, 2020