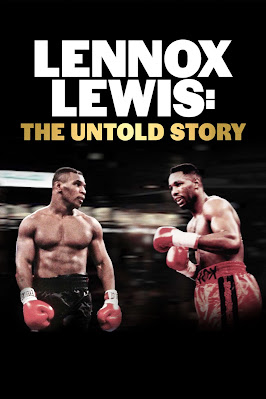 Lennox Lewis The Untold Story was originally scheduled to premiere at Tribeca earlier this year. When it was announced I instantly emailed the PR firm and asked them if Lennox Lewis was going to be available for interviews. The announcement was so far ahead of the festival that I caught them off guard.  They may not have been ready for  someone to want to see a film about Lennox Lewis but I damn sure was ready. As a long time boxing fan I can honestly say that Lewis is one of the greatest fighters I have ever seen. When he was at the top of his game no one, not even the likes of Mike Tyson could best him.

The film about Lewis may seem rather calm and sedate, however like the man it is about there is way more going on than meets the eye. Covering his days from growing up in London to his move to Canada (he left before the riots that tore the city apart) that introduced him to boxing on through his march to conquer the boxing world, where he is one of the few people to retire as a unified champion of the world (he held all the championship belts of all the boxing organizations).

To be completely honest I went into the film expecting it to be big and loud and showy like so many other boxing films. Instead what I got was a quiet film about a man who shook the pillars of heaven. Lennox never had to be big and showy, and this film explains why, Lennox was and is the real deal. Lennox didn’t have to show off, he just had to show up. In order to make that happen he chose to work with the  friends who got him where he wanted to go. He trusted them to keep him grounded and the result was a man who went to the top of the boxing world and stayed there.

What surprised me was that while the film initially seems like a straight forward look at Lennox’s boxing career, it actually begins to open up with little details that quietly paint the life that goes on around him. From the way he kept his friends close, to how his mother cooked for him at training camps, and on to bits of his personal life, it’s all there. There was a moment somewhere in the last half hour when I suddenly realized how much information was coming our way. I loved how the film  quietly just let us know everything we needed to know. The result is a film that quietly grows in stature.

How will this film play for someone who doesn’t know about Lennox Lewis? I think quite well. I think the film nicely explains who Lewis was as a champion and is as a human being.  While I think that the construction of seeming to focus on Lewis’s career may keep some at bay at first, I think by the end they will fall in love with the film and the man.

And a quick shout out to Dr Dre who provides some killer narration. Given in a low key, dry manner, I had to replay a couple of lines because I loved how his delivery added power and humor to much that he was saying. It truly helps make the film as good as it is.