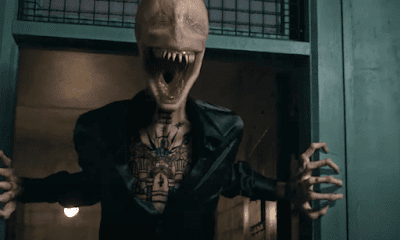 After her village is destroyed by an invisible  monster and knocks her unconscious Danielle "Dani" Moonstar  wakes up chained to a bed in a deserted infirmary. A doctor appears and tells her she has been brought to a special location where they are going to help her find her true potential. Dani is there with several other young people with special powers. It is not clear why they are there or why they aren't being allowed to leave.

Far from the disaster that some people have suggested NEW MUTANTS clearly was messed with. There is a rambling nature that has moments where some scenes are there to link up changes. Much of it feels half thought out and cobbled together. It works against real enjoyment.

If there is a problem with the film is that despite some good effects the film feels cheap. Blame a look and feel that mirrors a couple hundred haunted institution film. We've been here before any number of times. If the film hadn't been about the formation of a superhero team this would have been completely lost and there really wouldn't have made it stand out from other similarly set films.

That the film doesn't work is kind of sad. The finale is pretty good. The characters are well drawn, unfortunately they aren't really given anything much do do.

Worth a look, but only when it hits cable or streaming service