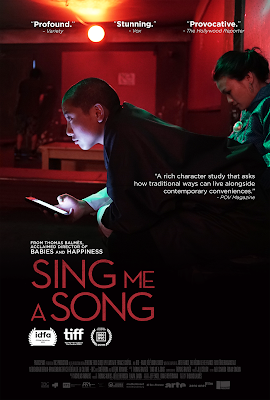 Ten years on Peyangki, the subject Thomas Balmès’ earlier film Happiness, the once wide eyed child monk is now an internet addicted young adult. While he still studies the scriptures, he is also trying to make time with a young woman in a city far away. He is hoping to make enough money to travel there to meet her. He is unaware that she is a young single mom looking to escape the country.

Stunningly beautiful film is going to thrill many and bore others. Don't get me wrong, I love this films slow mediation on the internet and it how it is altering the world, however I know some people are going to want to jump ship figuring there is nothing here other than pretty pictures. Yes this film is largely amazing images but there is more going on than meets the eye. By the time we get to a late in the game shot of four people sitting on a couch not talking but staring at their phones we've had a lot of time to truly process how evil that image is.

The power here is in what is not being said. Sure people talk and interact but as time goes on we realize how little of it actually means anything. The silences are truly deafening. I was moved.

If you want an off the beaten trail contemplation of our world SING ME A SONG is recommended.