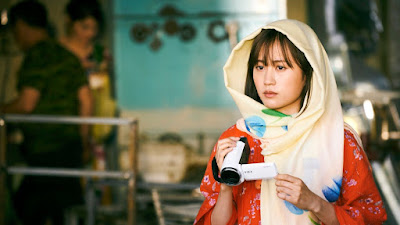 With TO THE ENDS OF THE EARTH playing Metrograph's Virtual Theater starting Friday here is a repost from last year's New York Film Festival.  Please keep in mind while I am not raving about the film a miss by Kiyoshi Kurosawa is better than most other people's best film
Kiyoshi Kurosawa is one of my most favorite directors. Say what you will you are never going to get a typical anything from him. To be certain some films are better than others, with some being made for love and some being made for money or some other reason. Either way what he does is more than likely going to make you wonder what he was thinking, such as his NYFF entry REAL which had a sudden turn in the final minutes when a sea monster attacked (the collective gasp from the NYFF blue hairs in the audience was worth the price of admission)

Kurosawa's latest TO THE ENDS OF THE EARTH is a huge head scratcher of a film. Made because he was given the opportunity to make a film in Uzbekistan, the film simply follows a young woman who goes around the country as part of crew shooting a travelogue. Things happen such as she frees a goat (this is a kind of shaggy goat story), searches for a monster fish, gets chased by the police and sings a version of Edit Piaf's Hymne à l'amour (twice).

What this all means is anyone's guess because other than as a record of a trip around the country nothing hangs together. Yea it's some great sequences (the song is killer) but there is no narrative point. This is simply just some things that happened.
"
Watching the film I wasn't long into it when I mumbled to myself, "justifying your trip to Central Asia,eh...". Don't get me wrong WTF Kurosawa is better than most people's masterpieces, but of all of his films, and I've seen almost all of them, this one stands alone as being the most pointless. Honestly, forget the NYFF website's  description which includes this bit "To the Ends of the Earth is both an entertaining tale of culture clash and a penetrating depiction of a young woman’s alienation [I comment: alienated from what? she's the one who is constantly just running off on her own] and anxiety that pushes the director’s craft into new, mysterious, and enormously emotional realms." and just know this is a grand mess of a film. Yea it has some great things in it, but it is actually a rational argument as to why past NYFF filmmaker's need to not get a free pass into the next fest.

For hardcore fans of the director and those who love beyond messy films only.
Posted by Steve Kopian at December 07, 2020