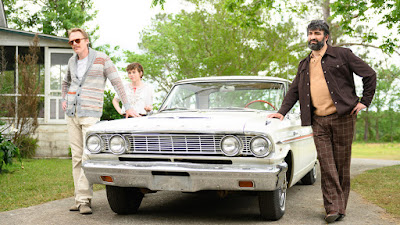 14 year old Beth loves her Uncle Frank. She can't understand why he doesn't come home more (he is a professor in New York) When she turns 18 she picks a college in New York and drops in unexpectedly on her uncle. At first he pretends to be straight but he eventually comes out to her. When his father dies he and Beth return home for the funeral with his boyfriend Wally in tow.

This is an uneven story about being gay fifty years ago. The cast is good but the script, which shines in the first half with some great characters and some unexpected turns becomes a bit pedestrian during the trip home. It's not that there is anything bad, hell the end has an emotional kick to it,  rather the film goes from the sort of thing that we really haven't seen in a big budget narrative, to a by the numbers coming together story.  I hated that I went from not knowing where it was going to being able to be three scenes ahead of the characters.

While far from a bad film, this is a really good film that starts off as a great film.