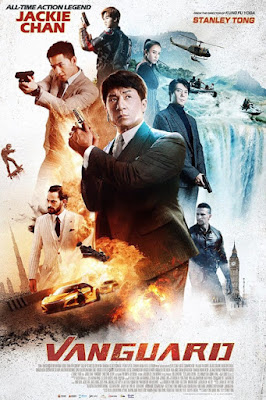 The events in VANGUARD are set in motion in London during Chinese New Year  when a rich accountant is kidnapped by a band of mercenaries. They want the accounts that he had been handling for now deceased head of a terrorist organization. His son wants the cash, and revenge since the accountant had ratted him out to authorities.  Two Vanguard agents then rescue the accountant and his wife. However the terrorists threaten his daughter and the chase is on as Vanguard tries to keep everyone safe in an escalating series of pitched battles.

One of the few truly new films playing in theaters VANGUARD is another action film from director Stanley Tong and nominal star Jackie Chan. While Chan is billed first he is actually a more a supporting player, being the head of the multinational security firm that gives the film its title. Not to worry, this film is great fun.

Yes, I’m breaking with my fellow critics and I’m going to reveal I had a blast watching this film. Pure popcorn for body and soul, VANGUARD is far from deep, meaningful or even logical but it moves like the wind and entertains more than most recent films I’m seen. Sure the CGI, like the animals, such as lions and hyenas, is crappy, but I really didn’t care. VANGUARD is never pretending to be anything other than entertainment, and on that level this film kicks serious ass. This is a 105 minute mind cleanse and we are so much better for it.

Frankly I don’t know why this film isn’t getting talked up more. The action is well done and gripping. Sure there are times when Jackie’s being goofy makes you groan, and some of CGI is clunky but the rest of the violent ballet makes you go wow.

Simply put I has a blast watching.

To hell with high art- give me crazy ass action that just moves and I am happy.

Currently in theaters  VANGUARD is the perfect film for anyone who just wants to sit and not think about serious stuff for a couple hours. Highly recommended for anyone who can go with it’s lets have fun vibe.