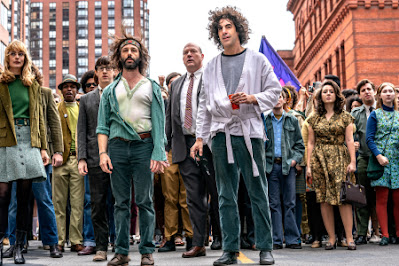 Aaron Sorkin's Oscar worthy look at the  titled event will move you deeply. The film is a look at the trial that shook the nation and showed the grand divide in America.
While Sorkin compresses the months long trial and manipulates some events, the spirit and ultimate truth of the events come through. The trial was a political one and the far right was out to get the defendants. Sorkin shows us in no uncertain terms that they were up to. Though I have always wondered if the they really wanted to make sure they were convicted why they let the boob Judge Hoffman preside since it was bound to be overturned. I mention this because Sorkin makes it clear from early on the man had no business being in a court room, at least on a trial of this magnitude.

The cast is perfect. Everyone is right on target. The best is Sacha Baron Cohen as Abby Hoffman, who brilliantly manages to keep us watching with his antics, while at the same time surprising us at every turn at how smart the jester really is. As Jerry Rubin says Abby is smarter than you think" and Cohen shows us that he is right.

The mark of a truly great historical drama is one that makes you get lost in it it's tale and make you sit on the edge of your seat waiting to see how it all came out. You watch leaning forward waiting for the big reveal despite knowing how it all went down. THE TRIAL OF THE CHICAGO SEVEN makes you lean forward. I knew how it as going to go but I still had to know how it was gong to go. And I cheered and yelped and laughed all the way through.

One of the very best films of the year- THE TRIAL OF THE CHICAGO SEVEN is a must see.