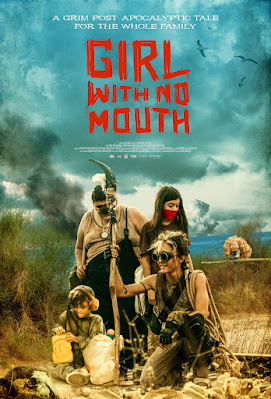 Can Evrenol who made the truly disturbing BASKIN switches gears and makes a family friendly apocalyptic tale. The film is the story of the title character who was injured by a toxic explosion. Her uncle arrives and want to take the girl away as part of a plan to hide the crimes of the corporation he works for. She escapes into the forest and meets up with several other children who have their own physical problems. They are pursued by the uncle and his men as they try and make their way to a magical lost city.
I think this is a surprisingly good fairy tale. And make no mistake this is a fairy tale, with characters all seeming to represent certain aspects of  human experience. Yes they are kids, and evil adults, but they are all representative of something more as you will realize when you realize one kid has no no nose, another no eyes and so on. This is not meant to be a straight on representation  of reality but some part of the world it is taking place in. I was enchanted.
More to the point I absolutely love that the film simply puts forward its story and doesn't try to explain it all. Not everything explained. The story kind of bleeds off the screen and we are left to ponder things for ourselves. I also love that the kids fumble about as kids would fumble about, without a clear direction except the one dictated by fate.
And the film gets bonus points for have real danger and exacting a cost. Where most American family films would make it all okay, here things aren't. Stuff happens and even the ending makes you wonder what is next- in a good but also wary way.
This is a super little film. This is the type of film that I love to highlight.
Recommended, especially for those who live to go off Hollywood, THE GIRL WITH NO MOUTH hits homes video and VOD December 8.
Posted by Steve Kopian at December 05, 2020