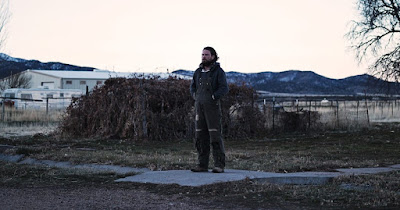 David is separated from his wife. Things have gone south between them and they are trying to work it out by stepping away for a while. The trouble is she's taken up with a new guy and it is killing him inside.

This heavy drama  begins with David standing over the sleeping form of his wife and her lover.  He doesn't kill them but flees into to the early morning. Its a move that grabs your attention  and makes you want to see where this is going to go. It goes into a character study of one man dealing with his world coming apart.

Writer/director and editor Robert Machoian has made a low key and very visceral film. We are with David for the entire time and as such we feel what he does. We only knows what he does and as a result we have trouble sorting out what is really going on. In some ways it's on odd cinematic experience since we have been trained over time to expect to see more than just the POV of one character. It's a bold move that mostly pays off.

As good and as visceral as much of the film I'm still not certain to what degree I like the film. There is a moment at the end where the film kind of slipped away from me. There is a moment where the camera steps away from David and takes a wider view and I'm not certain it works. A shot before it would probably have been a better final image. Ultimately its a quibble, but it is also the moment where the film slipped and I couldn't be certain where to put it.