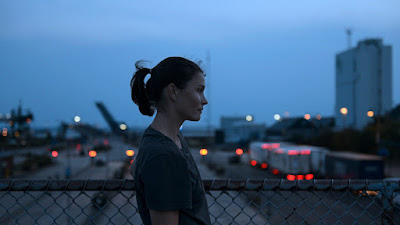 As a tunnel between Europe and Scandinavia is being prepared to be built, a ethnologist wanders around meeting various people in the town that is going to be altered by the tunnel. As she charts their lives and the places that will b lost or changed forever we get to know the people. She also falls in love with a younger man.

Some good time with some interesting people kind of washed over me without making much of an impression. You can partly blame that on the fact that I'm not sure what I'm ultimately supposed to get out of the film other than pondering the ever changing nature of existence. Outside of recording the lives of the characters it didn't seem particularly meaningful to me. Its not bad but nothing deep enough to touch my heart and soul.

You can also blame my lack of deep thoughts on the film in that in covering this year's New Directors New Films there are several similar films with similar ideas. The notions of a changing world and forced migrations were covered in other films that touched me more. This is not a knock at the film, which I will revisit down the road, but more a danger that occurs in festivals such as NDNF which tend to program a lot of films of a type.

Ultimately my quibbles aside this is worth a look if you are interested.
Posted by Steve Kopian at December 10, 2020