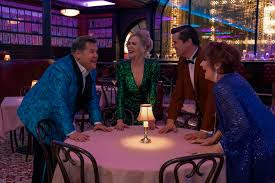 When a small town PTA refuses to allow a young woman to attend the prom with her girlfriend and cancels it to prevent a lawsuit, some on the outs Broadway stars decide to go there and hold their own prom.

Much loved Broadway show has been brought to the screen with mixed results. While there are some glorious moments and some great performances the film also has some problems in the direction and in two of the leads.

And that is a problem with the film, the film sometimes goes too far over the top. Things are too big, too silly. It's not something that is in individual performances but it ripples though whole moments in the film with some of the numbers being way too big. It doesn't work with some of the smaller numbers and moments which hit your heart.

The other problem is James Cordon. He isn't bad so much as horribly miscast. Many people say he is too campy or over the top, that's not the problem. Actually the problem is he doesn't have the weight. He never feels like a character, he feels like an actor playing. Not playing a character just playing. As a result he ends up as a hole in the film. Yea he's there but in the wrong sort of way.

Problems aside the film isn't bad. It's not great, but it entertains and for those it clicks with it will move them deeply.